Hooping: 15 Things That Won't Happen in a Hula Hoop Class 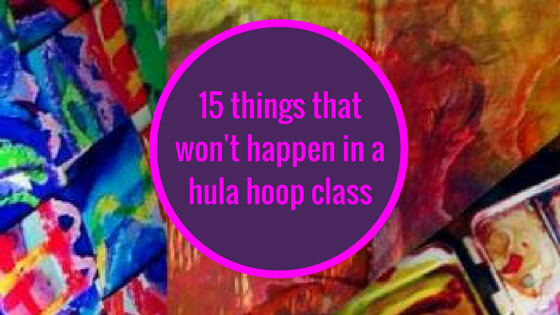 15 Things That Won’t Happen in a Hula Hoop Class 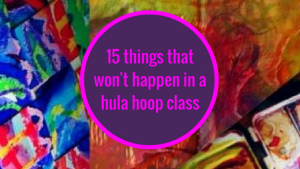 1. Having to compete against anyone

In a hula hoop class, no one is competing with you. Most people are brought up around competitive sport, and with hula hooping you are only up against yourself. That’s the fun of it! It feels good to let go of competing, and really satisfying to nail something that feels awesome to you. Bonus: no one’s going to body-slam you from Wing Defence.

2. Feeling out of place or unwelcome

In hoop classes, everyone’s at a different level and learning at their own pace. And people are happy to be there! In some yoga classes, it’s hard to know what’s happening unless you already understand what Balasana, Savasana, and Supta Baddha Konasana mean. Hooping is an inclusive activity with accessible terminology for everyone.

3. A prerequisite of expensive athletica/active wear

There’s no need to rock up to a hoop class in $200 yoga pants matched with the right top in order to fit in. You can come straight from work, or rock up in your jammies. No judgment. You do you.

You got 20 bucks? You’ve got a hula hoop! No need to remortgage your house to acquire what you need to work out and play with your friends. Hooping is totally affordable.

5. Getting yelled at by an instructor

The current trend in go-hard exercise classes isn’t for everyone. Spin cycle classes in particular seem to be the domain of instructors happy to shout at sweating, suffering bodies. If you’re not a huge fan of being yelled at to *GET UP!*, jump into a hula hoop class where there’s encouragement, awesome teaching, and space for you to go at your own pace.

6. Having to wait for equipment

If you’ve got a hoop, you’re good. No need to write your name on a board or wait for a cross-training machine that’s covered in sweat when it gets to you.

Hooping has really only taken off in the last decade, which isn’t really long enough to institutionalise the celebrity of your teacher. Most hoop class teachers are down-to-earth, great listeners, and have a great sense of humour. They’ve found a love of hula hooping and want to share it! There’s not a huge separation between you and your teacher. You can even teach them things sometimes!

8. Getting sleazy looks from other people

If there’s one thing that turns people off open-floor gyms it’s the weirdness of some of the members. Parodies often come to life in the weight-lifting area, where you might see someone with a leg on a bench, leaning in while pumping iron and gazing fiercely in your direction. Not in a hoop class.

9. Having an existential crisis while feeling like a hamster

Look, if you can get past 15 minutes on a treadmill without questioning your entire life, the nature of humans running on conveyor belts in buildings and the plastic buds playing sounds into your ears to make it bearable, you’re doing well.

If there’s one thing for sure, hula hooping is not a boring activity. If something isn’t working for you, you can play with another movement that’s fun or interesting! And you might go down a rabbit hole of fascination with a simple movement. It’s totally up to you, and your teacher’s there to guide you.

11. Being forced to watch screens filled with advertisements

Not all fitness places have 17 flat screen televisions, but when they do they’ll show overseas war, climate disasters, political scandals and salmonella outbreaks while you’re trying to shift extra kilos on a treadmill. Try finding positive motivation to be active while watching the most depressing things on the planet live-streamed to your rowing machine. It’s difficult. Go to a hoop class instead.

12. Running out of music

Often people convince themselves to leave the house to go for a run or go to the gym, because they have killer tunes in their pocket! Well, when you’re sick of the same tunes or when your iPod dies, you’re alone with your heaving breath and the silence of your pounding footsteps. Or worse, the crappy TV being shown on a screen above you in a gym. At least in hooping classes you can trust your teacher to bring the beats for the whole class.

Mmmmmmmm, no thanks. You’ll be hard-pressed to find hoop classes that force you to do weird shit in the rain and get muddy while developing hypothermia. It’s kind of the hoop class antichrist. We’ll be over here having heaps of fun and hooping to some wicked tunes.

It’s not uncommon for people to throw up immediately after being pushed past a sensible limit in workouts. This might be after an intense spin cycle session in an overheated room. There are lots of different hula hoop teachers and classes out there, but none have the aim to push you so hard you’ll be sick after class. That ain’t no fun!

15. You need a spot because of the risk of injury

There’s always a small amount of risk with flying objects, but with hula hooping, the risk of injury is pretty small. Because you work with your own body, ability and strength, it’s an activity you can do alone in the park or in your living room without fear of breaking your neck or popping your shin bone out. OUCH. Of course, hooping is way more fun with a class full of people! That way when you do smack yourself in the face with a hoop you can laugh it off with new friends.

Hooping is AWESOME for so many reasons.

Find a class or workshop near you…

For free tutorials, competitions, special offers and the latest hoopla!

A $5 monthly account fee applies when you have a balance greater than zero at any time within the month. Your first payment is payable up front to complete your purchase. To view the full Terms and Conditions please click here